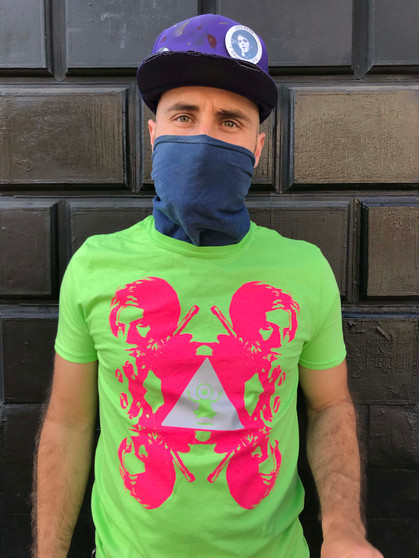 Availability:
This item is available as a limited edition pre-order. Orders will ship Dec. 1, 2020.

Internationally renowned British Pop artist Billy Chainsaw has been crowned MAKER OF THE MONTH by San Francisco’s Fleetwood SF gallery. This accolade demanded that he design an exclusive t-shirt to commemorate the fact.

"THE VISITOR" arT-shirt features one of Chainsaw’s guiding lights, David Bowie, in his role as Thomas Jerome Newton in Nicolas Roeg’s magnificent movie "The Man Who Fell to Earth."

Chainsaw says: “I’ve always regarded Bowie as a visiting alien whose purpose was to inform those tuned in enough to listen, and send them on a creative trajectory they would have otherwise never considered.”

"THE VISITOR" arT-shirt sees Chainsaw collaborating with ALAN DICKEY of SF’s ABOUT BEING SEEN, and incorporates one of Dickey’s ULTRA REFLECTIVE designs.

Released by ABOUT BEING SEEN, THE VISITOR arT-shirt is sold exclusively through FLEETWOOD SF.

Now is the time for loving the alien.

Original Illustration by Billy Chainsaw. Hand printed by About Being Seen in San Francisco, CA.

Do What Thou Wilt T-Shirt

Designed by internationally renowned British Pop artist Billy Chainsaw, the DO WHAT THOU WILT t…

The Ocean Beach classic t-shirt brings us back to the chillest beach the Bay Area has to offer. Laye…

Do What Thou Wilt T-Shirt

Designed by internationally renowned British Pop artist Billy Chainsaw, the DO WHAT THOU WILT t…

We collaborated with Gracie CT of Old Crow Tattoo for these beauties. Victorian-style tattoos of han…

No description necessary. Created and printed by the one and only Heavy Slime. Black and red ink on…